Purpose. Our aim was to evaluate the impact of different superimposition algorithms of 3D models created from CBCT images. Series of postoperative CBCT scans were investigated in order to assess changes in mandibular morphology and position after surgery upon a time.

We applied the most common superimposition methods in clinical and scientific practice. Postoperative CBCT images of seven patients were evaluated in our study. The reference data was the first postoperative scan that is usually taken within the first week after surgery in all patient studies. The second and third scans were taken 4 and 12 months after surgery respectively.

First of all the combination of landmark-based segmentation method and surface based superimposition method was used in our research. It is a semi-automatic superimposition technique. For that we used Meshlab software. CBCT volumes were imported into ITK-SNAP software for the segmentation in order to create 3D surfaces of the mandibles. The 3D surfaces of first, second and other postoperative time points were exported as stereolithography (STL) files using ITK-SNAP software (Fig. 1).

After segmentation of mandible from different time-points naturally do not match in the coordinate system, since patient head orientation in the CBCT scanner was different during scanning between the time-points (Fig. 2). 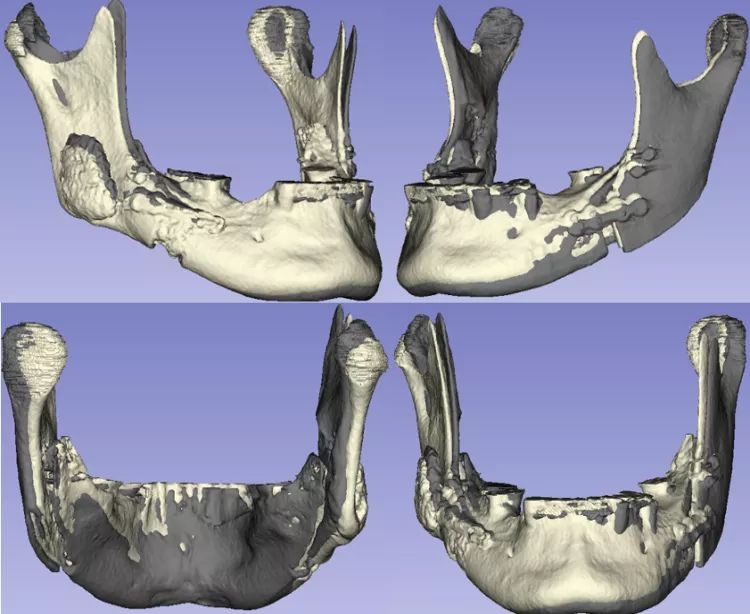 Fig 2. 3D surfaces of mandibles from different time-points in a single coordinate system.

The spatial position of the first postoperative mandible was different in comparison with the second postoperative mandible.  Firstly, we applied landmark based superimposition method in Meshlab software. Manually five pairs of landmarks was selected on both 3D virtual mandibles (Fig. 3).

Landmarks were selected on clearly seen and non-variable 3D models surface. It is better to choose well defined and easily reproducible locations for landmarks, e.g., sharp bone structures, bone canals or titanium plates. The results of landmark-based superimposition are presented in Figure 4. 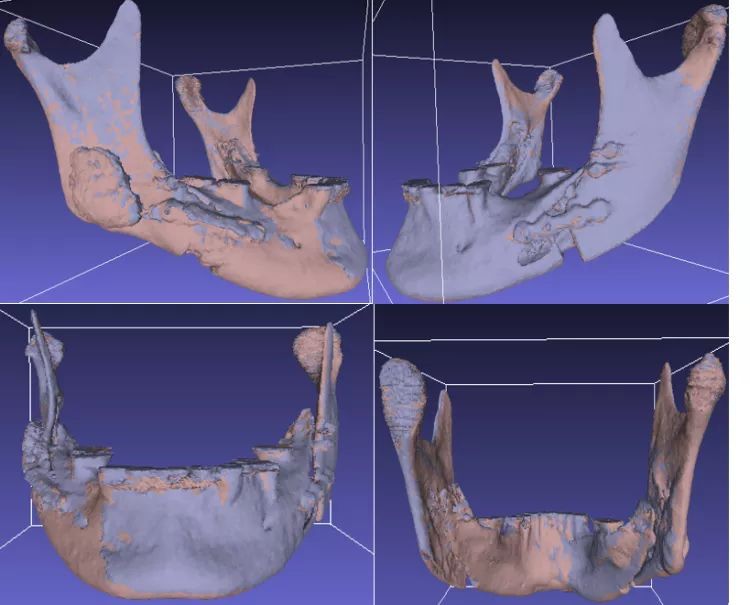 The result of landmark-based superimposition method is not accurate. The spatial position of the second postoperative mandible is not the same in comparison with the first postoperative mandible position. The reason for it is that the software calculates the best match between the pairs of landmarks and disregards the 3D surfaces themselves. Due to this, subsequently we used the surface based superimposition method where software applied mathematical algorithms to approximate surfaces of two mandibles into the best match. The results of surface based superimposition are presented in Figure 5. 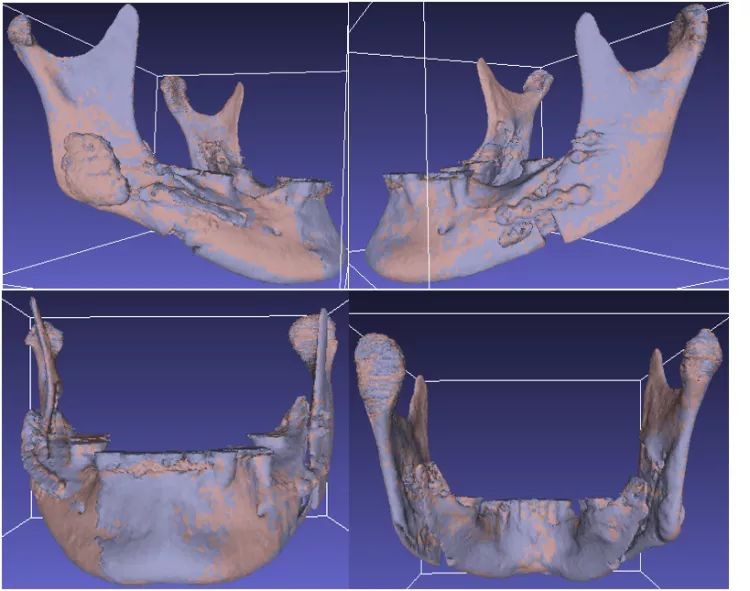 The position of the second postoperative mandible is symmetrically overlapping the initial mandible. 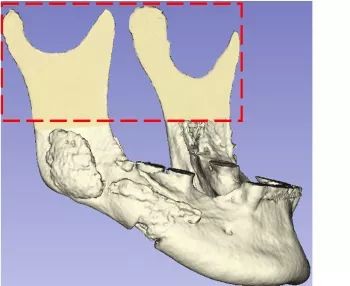 It is very important for reference region that chosen area was not subject to change during surgery. The parts of upper mandibles were extracted and exported as STL files (Fig. 7) in ITK-SNAP software. 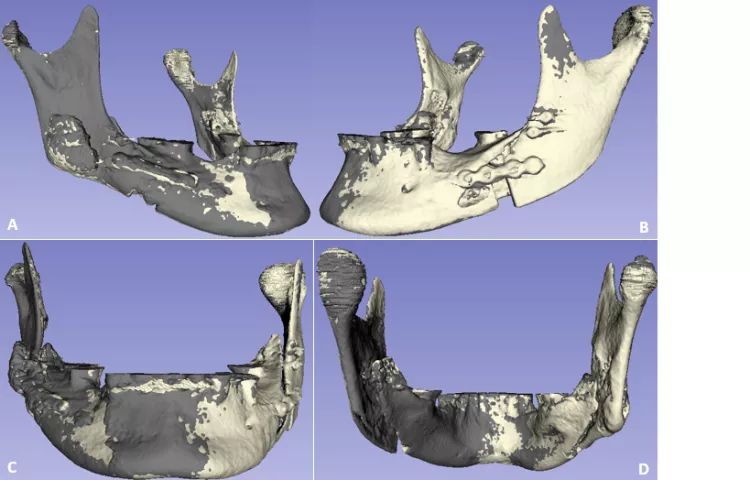 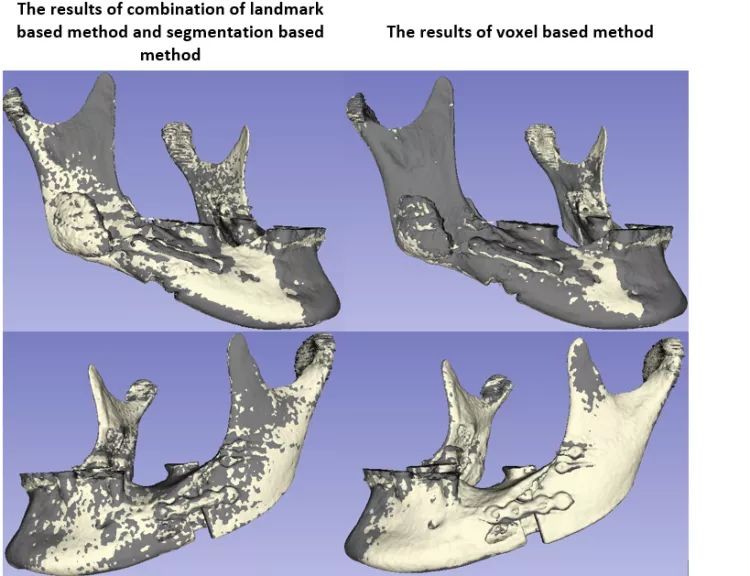 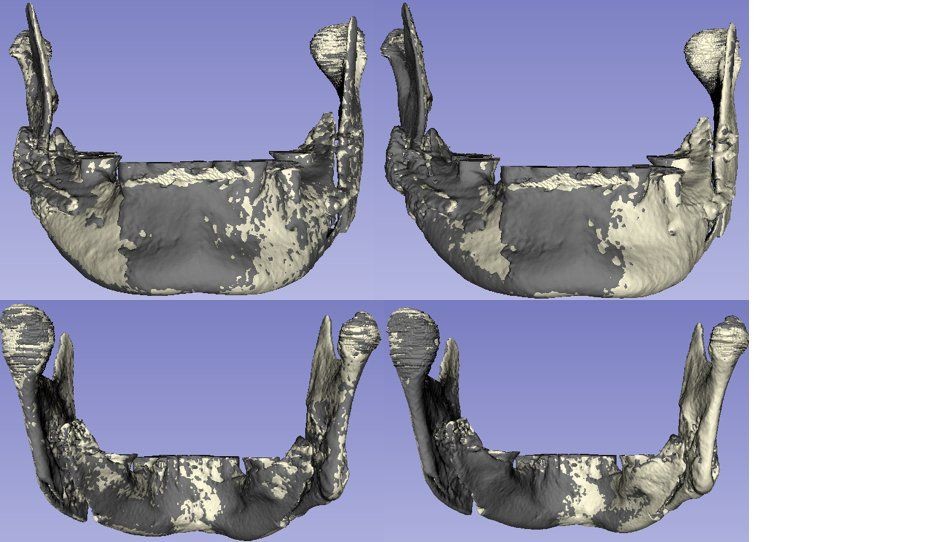 Closed point colour-coded surface distance maps are presented in Figure 10. The maps are quantifying the relative displacement of the second mandible with regard to the first one. 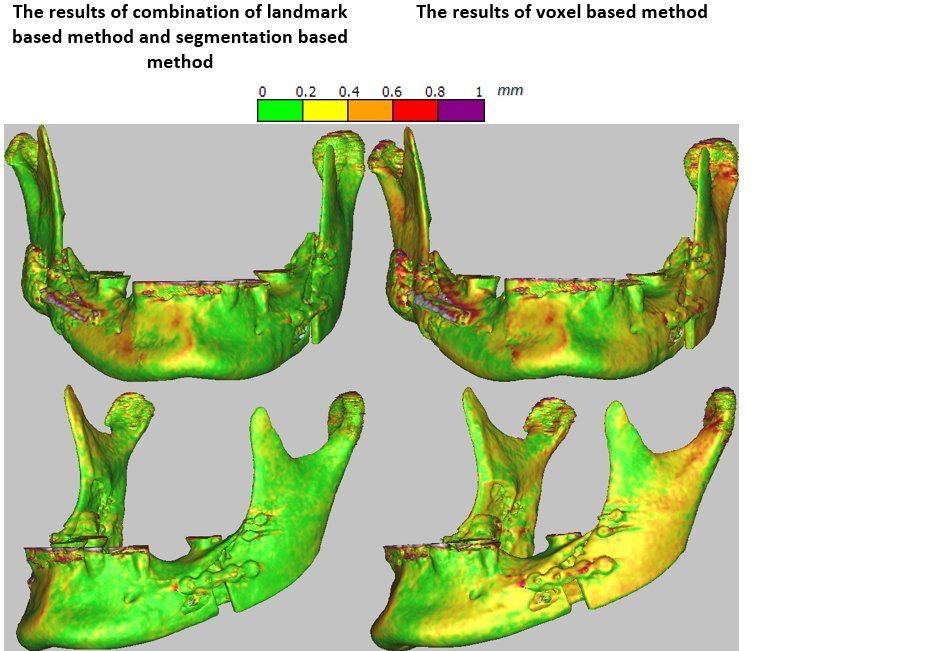 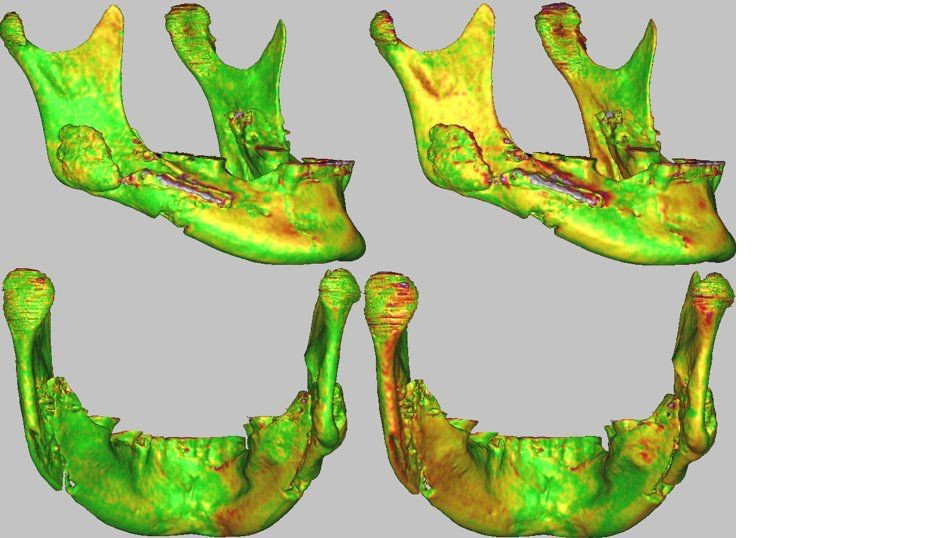 The results showed that the combination of landmark and segmentation based methods is more efficient to evaluate the change in morphology of small body parts, like postoperative mandibles, in the comparison with the voxel-based method. The combination of landmark and segmentation based methods has a few advantages compared with a voxel-based method. The advantages are these: combination method is quite rapid, has a user-friendly software interface, and the most significant aspect – it is more accurate in our hands. The position of mandibles can be different for each CBCT procedure. During CBCT procedure performance, it is practically impossible to assure that the position of mandibles would be ideally the same with regard to maxilla due to ongoing change of occlusion after surgery. Due to that, we can’t choose the cranial base region, forehead, the left and the right zygomatic arches in the voxel-based method as a reference regions because in all cases it will make an alignment errors. It appears that the non-operated part of the mandible is too small to ensure accurate voxel-based superimposition of the mandible and inaccuracies may occur. Similar results of superimposition were obtained in all cases.